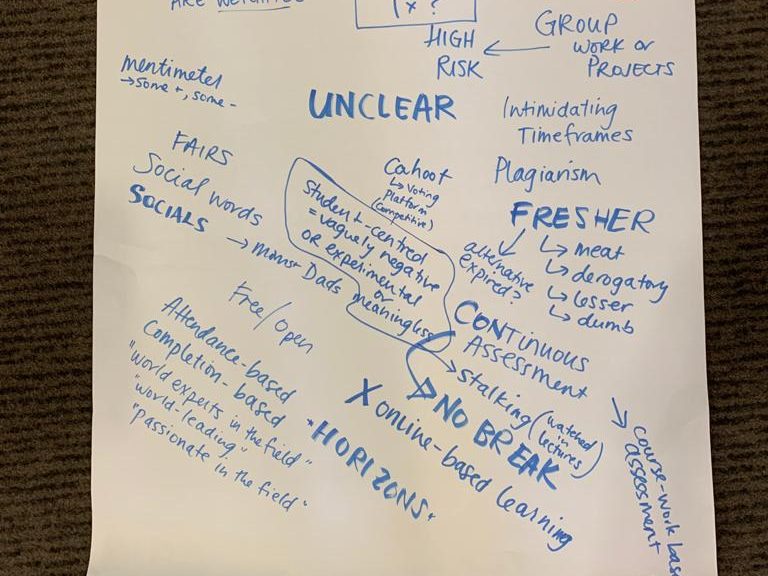 This post shares reflections from our three student partners.

What response to the survey did you find most intriguing?

Marine: The year 2020 has been an interesting one from a student perspective owing to the weekly strikes and Covid-19. Taking a step back, it almost feels like a year was taken away from us. Half the world was under strict lockdown, masks  or hand gels became absolute necessities, social lives were paused. It seemed and remains surreal. As students we have had to transition from face to face to online learning, for example I had to do online cloning, PCR and gel electrophoresis all online which was definitely a first for me, especially in such a lab based course. The fact that so many students responded to the word e-learning so negatively really triggers me. Why was it so unpopular? How was it affected by Covid-19? What can be done to allow this word to rise in popularity?

Ignacy: I think I was most surprised by some of the negative answers we received after sending out the survey. It seemed that at least one student thought that this was part of part of some project to make the course descriptions more alluring, whilst purposefully not trying to improve them. I found this quite surprising, as I would Imperial already is very student focused, and given for how large it is an organization, seems to listen to student demands, even though I know this doesn’t seem to be the most popular opinion, or at least not the “loudest” one.

What surprised you about the research project?

Marine: There seems to be an overall dissociation between what students think certain words mean and what academics actually mean. Our survey has so far shown that students much prefer explained words over academic jargon which may sound more challenging. Word nuances such as “teamwork” vs “groupwork” trigger varied responses with a clear favourite towards teamwork. Although these two words are very similar this may be due to students associating “groupwork” with the burden of having to work with an imposed team as it is often the case in school. The word “teamwork” suggests more freedom and the collaborative work to achieve a common goal.

Ignacy: I would agree, I found the discussion of words we had at the beginning just as the researchers to be the most revealing. Up till then, I had assumed that words like “student led learning” was some new, weird, experimental teaching technique where students have to research everything themselves and then present it to everyone else, and the teacher or lecturer only guide the students slightly so that they research broadly in the right direction. It was then revealed to me that it’s more like just regular classes, but a bit more interactive, which is a much nicer concept.

NZ: I was most surprised by how much collaboration there was between staff and student. Before the project started, I was under the impression that the student members would simply get a bunch of tasks from the staff member to complete on our own. I think the close interaction and teamwork between staff and student members ended up being very beneficial for the project because it offered different perspectives which allowed us to make a well-balanced survey. Another surprise would be the large number of responses we got, given that we sent the survey out during the pandemic and exam season.

What is one valuable thing that you’ve learnt while engaging with this research?

Marine: Despite already knowing how differently departments operate, this survey made me realise how undergraduate student experiences can vary even more based on how they respond. For example, standard words in academia such as assessment words (continuous vs final exam), labs, lab reports, seminars trigger varied responses based on the course degree. This research project allowed me to some extent to “put myself” in another students shoes and get a glimpse of what their experience at Imperial so far has been like.

Ignacy: One valuable thing I learned was the importance of forseeing your plan and its effects. We had a lot of freedom in designing the survey, and the questions that we posed on it, and part of the reason we had so many questions with emojis and scales, with not so much qualitative data, was because we knew we would be presenting it at a seminar (funny how that turned out… but the point still stands), and those kind of results would be easily presentable. What use is it to research something, and have data that only you can understand?

NZ: The most valuable thing I learnt from this project is to keep an open mind. During the project, ideas were constantly generated and discarded. Therefore, it was really important to be open-minded and unbiased in order to sift out the best and most useful inputs instead of getting hung-up over some of them. The pandemic also hit during the early stages of the project. Had we not been open-minded and willing to try alternative ways of working, this research would most likely not have happened this year, meaning we (the students) probably wouldn’t be able to see it to completion. Being open-minded was also valuable when analyzing data, especially the ones which were unexpected.

How do you see this project impacting your future studies, research or life?

Marine: I have unconsciously underestimated the power of words and the effects it may have on students. Words which some think as neutral synonyms can actually trigger a more positive or negative response based on just word nuances. This has remodeled the way I will use words such as “teamwork against groupwork” in reflection exercises, interviews, academic work. I really hope this project will also benefit the academics who use such standard words to structure their educational material and understand the effects these may have on their student experience or attractiveness to course descriptions.

Ignacy: I think although I don’t see this project directly impacting my nearest upcoming choices, it did grant me a better respect for the tools at my disposal. In school I already learning how far writing some assignments seemingly out of hot air could get me. This was followed by a student body campaign 100% committed to making vague, immeasurable promises that was terrifyingly successful. From these experiences I already had an appreciation for the power of the language, but in this project, I learned the subtleties of language, that aren’t as easy to see, but will probably prove equally useful in the future.

NZ: This project has been an exercise in collaborating with others, being open-minded and analyzing data. I believe these three skills are very valuable for my future since I plan on doing research, so I’m thankful that I had a chance to further develop them through this project. Seeing some of my ideas be incorporated into the final product has also increased my own confidence, which will help me be less reluctant in voicing my own opinions during future group projects. Of course, the project has also reinforced the notion that different words have different impacts on people, so I will be even more conscious of my word choice when communicating with others.