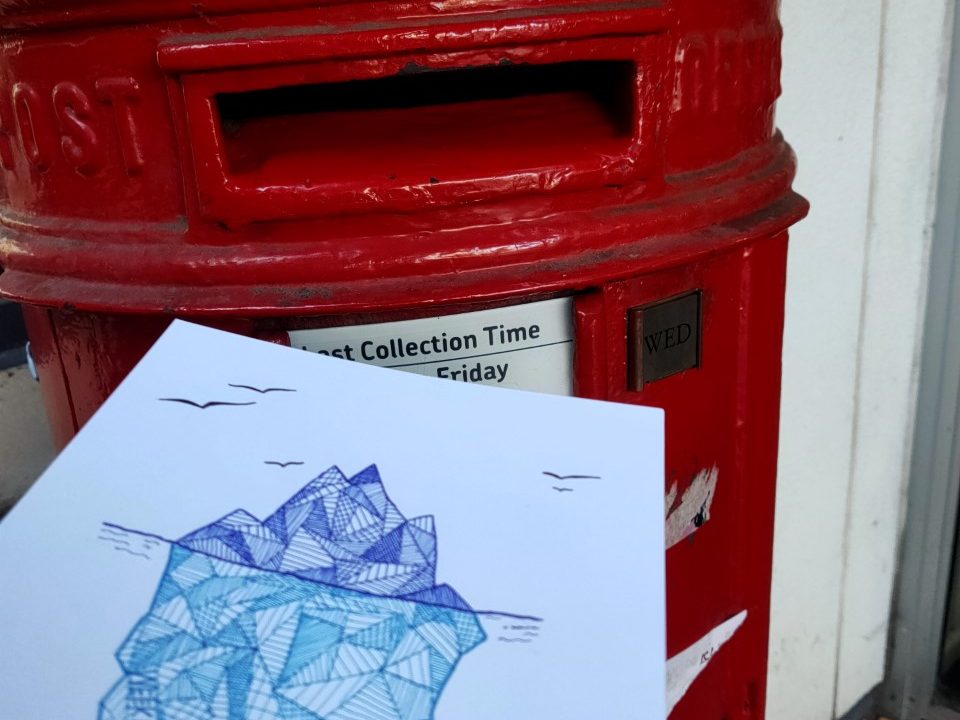 How do you reflect on learning in a creative and interactive way? The answer’s on a postcard.

Last autumn, four of our students embarked on the Dear Change Maker postcard project.  The project involved two pairs of students, each taking a different Change Maker module, exchanging weekly postcards about their learning experience.  As with any postcard, the students used the two sides to communicate, with text on one side and a picture on the other.  However, unlike regular postcards, our students created the picture side of the postcard themselves.

With this format, Dear Change Maker was a multi-modal, reflexive and collaborative venture. It resulted in a unique set of correspondence that articulated and depicted four students’ educational experiences during this challenging academic year.

Interactive, therapeutic and encompassing a wide range of perspectives

The interactive aspect was particularly appreciated by third-year Ting Lee (studying Creative Futures) and his ‘pen-pal’ second-year Anastasia Kolesnikova (studying Global Village: Innovation Challenge).  They were both biochemistry students and they used the postcards to share reflections not only on their Change Makers modules, but on their core degree experience too.  Anastasia was enthusiastic about the therapeutic qualities of their correspondence. On her final postcard she wrote:

I’ve enjoyed this experience immensely. It was therapeutic to discuss daily lives, challenges and frustrations with projects. I also think having a similar educational background made it quite fun.

The other pair included Rasika Kale (studying the third/fourth-year module Creative Futures) and she wrote to Nadia Davis (studying the second-year module Global Village: Visual Arts Challenge).  In her final postcards, Rasika recognised how the postcards expressed an eclectic range of thinking:

I think the main strength of the 2019-2020 Dear Change Maker Postcard Project is the way it shines a light on the different perspectives and avenues for thought covered.

Indeed, the students’ cards covered cognitive, emotional and social aspects of education.  Some focused explicitly on the content of the modules, others on their personal perspectives and interactions, others gave philosophical commentary, while some contextualised these with broader experiences in their own lives – and all this through the image and text of an A5 postcard!

One of the common themes evident in the postcards was the challenging nature of these modules. On the modules, students choose their own focus and they also engage in extensive group work with other students from across the College.  The reflections on the postcards suggested this can be daunting as well as exciting, especially at the start of the module.

Moreover, on all these modules, students are tasked to investigate a research topic on an issue in an unfamiliar contextual setting.  Last year, for the Global Village modules, students researched a community in Johannesburg, South Africa; and for the Creative Futures module students were researching life in a different temporal setting, the future. These distinctive case studies push students to engage with the world in new ways, requiring new investigative tools, research methods, modes of analysis and even new types of empathy. This was represented on the postcards too.

And Rasika used an iceberg to represent some of the more hidden social, structural and linguistic issues revealed by the Causal Layered Analysis approach to Futures Studies.

Ting Lee’s feather arrowed postcard (made with real feathers!) not only pushed the boundaries of what could be stuck to a postcard, but also represented the different approaches that could be taken when researching the future. For me, his ancient map again had metaphorical significance in representing the pioneering enquiry based learning he was undertaking.

Another theme in the students’ reflections on their postcards, and evident in the design of the postcards themselves, was creativity.  The students recognised the value, but also the difficulty of being creative in the midst of a demanding STEMM degree at Imperial College. Following a creative thinking activity using Lego, Anastasia illustrated a postcard with this advice:

Ting also commented more than once on the therapeutic value of what he termed ‘creative release’. In his final postcard (during the COVID-19 crisis), he wrote:

Life is hard, but a few words and a little colour can make it a lot easier.

Ting certainly used the postcards to express creative thoughts and his postcards included a humorous prediction on the future every week. For instance:

As neural interfaces surpass interspecies barriers, future dogs will never have to ponder if they are, in fact, a good boy.

Finally, having made choices in much of their learning, and having added their own creative input into their projects, it was very satisfying to complete the assignments. For the Creative Futures module Rasika depicted the satisfaction of things coming together.

However, from February the modules were severely disrupted. Industrial action was followed by College closure due to the COVID-19 crisis, meaning that for these modules there were few classes on campus in February and none in March. The students wrote about the confusion and disruption at the end of term.

Anastasia and Rasika wrote about the fear, confusion and emotions at that time.  The chaos and fear was palpable as they described how students scrambled to return home and to safety.

Ting simply lamented, ‘I wish that this course, much like my final year project and entire degree hadn’t been so abruptly cut short’. But, as with anyone sending postcards, we were dependent on the Royal Mail and the project was put on hold. As Ting said:

If only there was some way mail could be sent and received instantly at no cost.

Nonetheless, come June, with lockdown easing, students were ready to finish the project by writing final postcards summarising the project itself.  Perhaps most impressive was the reflexivity evident and this was recognised by the participating students.

The main take away that I learned was self-reflection.  This was aided by the postcards as I felt that writing a summary every week really aided me developing my own thoughts and opinions.

For me, what was most striking in their summary postcards was how reflexivity specifically surrounding their own learning was evident on quite a deep level. I think this ability to understand one’s own thought processes – this ‘metacognition’ –  surrounding learning is extremely valuable. This is particularly so in an age of rapid change when knowledge and skills can quickly become outdated, requiring us to learn afresh again and again.

For instance, Rasika impressively reflected on how the broader staging of her thinking on the postcards outlined the trajectory of her own learning and development on the module:

As the weeks go on, my own postcards go from theory and method-based, to more topic-based musings, to an integrated view of my narrative as part of a whole with all of my classmates’ narratives.

Rasika related her learning to what she was experiencing in her real life.

While the postcards mainly focus on what we did in class, it is evident that I start to apply what I have learnt when thinking about what is happening in the world around me.

And then how she developed more personally

These postcards are primarily a personal record, but help paint a vivid picture of how we grew as we attended our Change Makers classes.

I think it is appropriate to finish this blog with Anastasia’s final question to Ting and her proposed answer:

I have one last question. What do think learning is?

From this experience, I think my answer before would have been something like ‘acquisition of new stuff/knowledge that you will regularly use as not to forget’. But after this experience, I am tempted to say that learning is much more than memorising and practice. It’s the collection of events and jokes and comments made by your peers, the all-nighters you pull, the memories you create through classroom activities, the frustrations and simply the experience of tackling the unknown. What you have learnt is the experience which draws not only on information, but also your feelings and thoughts, and what you think of yourself before and after learning occurred. I don’t know if this makes sense, but I hope it does.’

It does to me and I think the postcards developed through the Dear Change Maker project are an excellent example of this. I’d like to thank Nadia, Rasika, Anastasia and Ting for creating such an illuminating collection.

One Reply to “Dear Change Maker”